Jun13 Comments Off on BMW Welt, the BMW Headquarters, and the Olympiapark in Munich

Although many professional football/soccer games have been moved to the Allianz Arena, the Olympia Stadium and Olympia Halle still host a wide variety of athletic and cultural events in Munich. The BMW Welt and the company headquarters are also located just south of the Olympiapark underground station. Olympiapark is approximately a 15 minute train ride from downtown Munich. 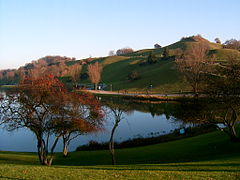 The closest hotel to these is the Arthotel Ana im Olympiapark ✰✰✰✰, which is in the Olympic Village just north of the same underground station. It’s in the same building where the Four Points Sheraton used to be.

Originally built as housing for the athletes during the 1972 summer Olympics, Olympic Village is now a residential complex which offers a number of restaurants and a grocery store.

Leonardo Royal Hotel Munich ✰✰✰✰: This hotel is located on the northern border of the park, and next to the Oberwiesenfeld underground station, which is one stop away from the Olympiapark underground station. The trains run every ten minutes during off-peak times and every five minutes during the rush hour. The ride between the two stops takes about one minute. It’s 1.3 km (4/5 of a mile) away from the BMW Welt and headquarters.

ibis Budget Muenchen City Olympiapark: 1.6 km (1 mile). It’s also 0.4 km (.25 of a mile) away from Oberwiesenfeld underground station, which is one stop away from Olympiapark.

Park Inn by Radisson München Frankfurter Ring ✰✰✰: 1.6 km (1 mile) This is a 0.1 km or a 2 minute walk away from Frankfurter Ring underground station, which is approximately a 15 minute ride awy from downtown Munich.

LetoMotel München City Nord ✰✰✰: 1.6 km (1 mile) The Olympia Shopping Centre is one of the largest malls in Germany, and this hotel is a 1 minute walk away. There’s also an underground station there (Olympiaeinkaufszentrum) which is served by two lines going into downtown Munich. Olympiapark is two stops away on one of the lines (the U3).

The SPOT – Serviced Apartments: 1.6 km (1 mile) All of the units here feature a kitchenette with a microwave, stovetop, refrigerator, and coffee maker. It’s also within walking distance of a shopping area with a supermarket and a number of restaurants. Tram and bus lines are right outside the building. Suitable for short or long stays from 2 days to six months.

The Closest Hotels to Marienplatz in Munich

The Closest Hotels to the Munich Oktoberfest (Theresienwiese)