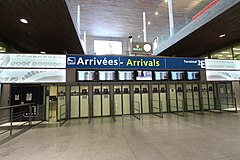 The two closest hotels to Terminal 2 are both located in the terminal. The first is the YOTELAIR Paris CDG – Transit hotel. As the name suggests, this hotel is specifically for passengers of international flights. One has to go through passport control in order to reach this hotel. The guests are only allowed to take hand luggage with them and can only stay for one night. 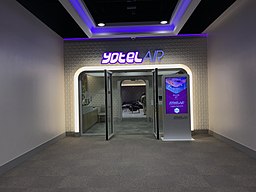 The other hotel in terminal 2 is the Sheraton Paris Roissy Airport ✰✰✰✰, which is located just above the station for Paris’ suburban RER trains. It’s housed in the boat-shaped building in the picture below.

Other hotels near Terminal 2 which are located within 3.3 km or 2 miles of the terminal:

Hilton Paris Charles de Gaulle Airport ✰✰✰✰ 1.3 km (4/5 of a mile): This hotel is a 1 minute walk away from the airport’s own underground trains and the hotel also runs its own airport shuttle.